The signing of the Memorandum of Understanding (Image: Kepco E&C)

Kepco E&C said the agreement is expected to lead to the development of floating offshore nuclear power plants equipped with BANDI-60 reactors, a small modular reactor design it has been developing since 2016.

The BANDI-60 is a block-type pressurised water reactor with a power output of 200MWt/60MWe. According to Kepco E&C, the block-type design – in which the main components are directly connected, nozzle-to-nozzle, instead of using connecting pipes – can eliminate the risk of a large-break loss-of-coolant accident and also provides improved operational surveillance and maintenance as compared with the integral type design. The reactor would operate at a temperature of around 325℃. To enhance the safety and performance, Kepco C&E says several advanced design features are adopted such as soluble boron-free operation, an in-vessel control rod drive mechanism, and top-mounted in-core instrumentation. 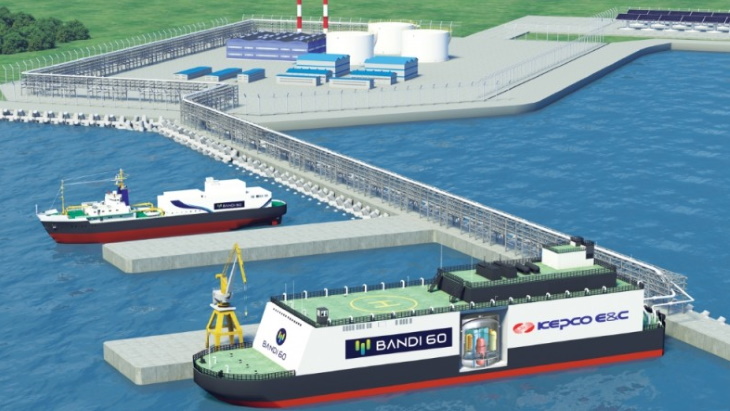 A floating nuclear power plant based on the BANDI-60 reactor (Image: Kepco E&C)

Choi Dong-gyu, director of DSME’s Central Research Institute, added that through its cooperation with Kepco E&C it would be able “to provide customers with products with enhanced stability and reliability”.

Russia’s first floating nuclear power plant, Akademik Lomonosov, which comprises two 35-megawatt KLT-40C reactors, started providing electricity in December 2019 to the isolated grid of the Chaun-Bilibino energy centre in Pevek, which is in the Chukotka region of Russia’s Far East. The plant was fully commissioned in May this year.